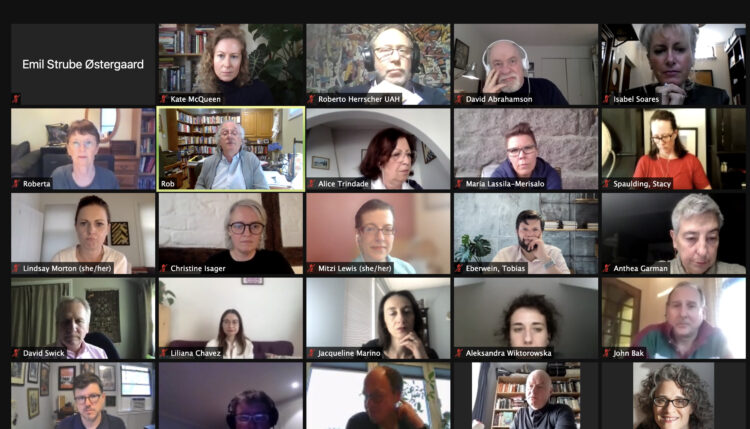 Convening in the Time of Covid: Greetings from Copenhagen

A Report on the 2021 IALJS Annual Convention

The pandemic set the agenda for the IALJS-15 in Copenhagen, first postponed a full year and finally simply not making it physically to the host city. Online, however, it brought together a record total of 114 attendees from 25 countries.

Also noteworthy is the extraordinary efforts of IALJS research committee member Lindsay Morton (Pacific Union College, USA) to schedule panels across the world clock so that members reaching from California to Sidney could participate in the synchronous sessions. The conference planning committee (Robert Alexander (Brock University, Canada), Tobias Eberwein (Austrian Academy of Sciences, Austria), Lindsay Morton, and myself) also decided to make session recordings, with permission of presenters, available to registered participants for a limited amount of time. This involved a risk of undercutting participation in real-time, but attentive audiences turned out for discussions at all times, and the flexibility was welcomed in the time zones least aligned with the conference schedule.

Among the lot of us, just two were present at the otherwise locked-down University of Copenhagen during the conference, namely e-assistants Emil Strube Østergaard and Peter Tengstedt. On demand, they were able to turn their screen cameras around to offer a brief panorama view of the lighted birch trees in the desolate entrance hall of the university’s Southern Campus that the rest of us never entered. Above all, however, the two of them were at home online and served as our proper local hosts, channeling participants smoothly through waiting rooms on the Zoom platform and keeping ready to record or redirect or respond to technical queries when needed.

With the support of the executive board, the IALJS graduate student committee made sure participants got to meet at least one more of the locals in a Q&A session with Line Vaaben. A staff writer at the Copenhagen-based Dagbladet Information, Vaaben specializes in feature writing and is the author of the book Fortællingernes tid – styrken i fortællende journalistik [The Age of Storytelling: The Strength of Narrative Journalism] (2019).

She introduced her conception of Nordic literary journalism as distinctly quiet or low key and readily referred attendees to a number of works worth reading. Among names to look out for, Vaaben mentioned Line Tolstrup Holm, Mikkel Vuorela and Anders Legarth Schmidt and on the question of accessing work in Danish, well, Vaaben’s general advice was not to shy away from using automated translation devices when encountering stories in foreign languages. While obviously a tricky way in, it is a way in. And let me add that two of Vaaben’s own stories are in fact available in authorized English translations at Longform.

Isabel Soares (ISCSP, CAPP, Universidade de Lisboa, Portugal) presented her keynote speech on Friday titled “From within the Ecosystem: Notes from an Observer of Literary Journalism.” As a personal response to standing discussions of how to organize our organization (see minutes from the business meeting) and how to define literary journalism as a field of study, she told her own story of the field as seen from her department in Lisbon as well as from within IALJS over the years. The image of the ecosystem carried a main point of keeping excitement with the discipline alive with patience and curiosity, and I encourage you to look out for an edited version of the keynote in the next issue of Literary Journalism Studies.

Generally, the impressive three-day program promised that a lot of excellent work is now in the pipeline. This year’s two prize winners were University of California’s Thomas R. Schmidt who was awarded the Susan L. Greenberg Prize for best research paper, namely “‘It’s OK to Feel’”: How Narrative Journalists Advanced Emotional Storytelling”, and University of Technology Sydney’s Tess Scholfield-Peters who won the Norman H. Sims Prize for best student research paper for “I Can Hear Them; I Can See Them: The Power of the Epistolary ‘Virtual Presence’ in Longform Narrative”.

One more image to take away from Isabel Soares’ keynote, was the framing of now 15-year old IALJS as a teenager in the process of testing boundaries while exploring and shaping its identity. Unwillingly, all of us have also lately been the teenagers who disappeared into our rooms and spent a few years in front of the computer. While managing quite well to meet up and keep up with each other that online way round, we are now getting ready to reappear and let our widely distributed selves come together again. With yet another virtual greeting from Copenhagen, I hope to see you all in Chile next May.

Christine Isager is Associate Professor of Rhetoric at the University of Copenhagen where she teaches writing and rhetorical criticism. She is co-editor (with Robert Alexander) of Fear and Loathing Worldwide: Gonzo Journalism Beyond Hunter S. Thompson (Bloomsbury, 2018).

Bringing Narrative Journalists into the Classroom with “Gangrey: The Podcast”