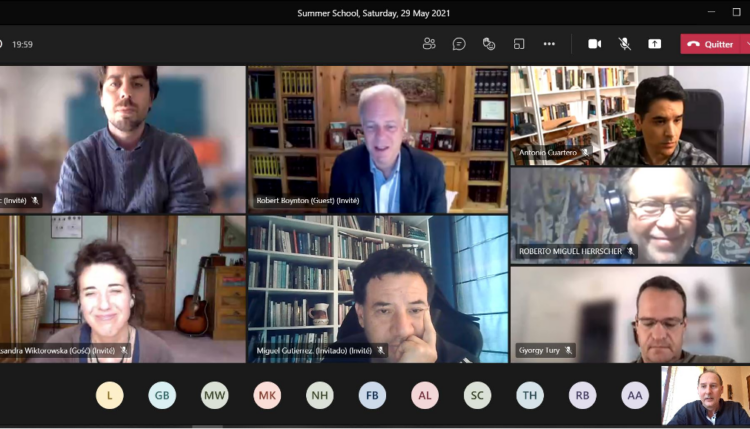 One milestone of the three-year Franco-Chilean CRONICA project, which was planned for 2020 but postponed a year and presented entirely online, was the first Transnational Literary Journalism Summer School, an École d’été that looked to promote graduate student research into comparative literary journalism.

Held in Nancy at the end of May, just following IALJS 15 in Copenhagen, the École d’été presented seven three-hour course modules following the topic of “Inequality and Social Protest in Transatlantic Literary Journalism: The Cases of French journalisme littéraire, Polish reportaż, Spanish periodismo narrativo and the Latin American crónica.”

The five-day graduate course drew Master’s and PhD students, as well as faculty members and professional journalists, from around Europe (France, Germany, Spain, Italy, Poland and Hungary), Latin America (Chile, Argentina, Peru, Colombia, Brazil, and Mexico), and India. The course modules, which included reading lists of literary journalism written or translated into four languages, explored how current trends in narrative literary journalism around the world are reshaping the media landscape of each country, providing a significant panacea not only to counter the decline in print media readership but also to placate the readers’ growing distrust in that media’s global message.

Following a program of morning and afternoon of lectures, discussions and workshops that covered seven principal themes treated in literary journalism (war, immigration, drug trafficking, child abuse, autocratic politics, ecological concerns and social inequalities), graduate students and faculty members were introduced to the historical and cultural motivations behind the current popularity of literary journalism in France, Spain, Poland and Chile. Courses were based in part on lecture and in part on group exchanges linked to the course readings provided in advance.

Students who wished to obtain a certificate of participation, or graduate school course credit in France, gave oral presentations on the final day. The seven modules listed different research topics for the students to choose from, each module offering varying avenues for further research and personal reflection.

The final day also included the participation of three professionals working in the field of literary journalism as writers, editors, translators and educators. In the morning, Polish literary journalist Artur Domosławski (Polityka) spoke about his fieldwork writing in South America, in particular in Brazil’s Amazonia; and French magazine editor Adrien Bosc (Revue Feuilleton) and American literary journalist/educator Robert S. Boynton (New York University, “Literary Reportage,” The New New Journalism) joined a roundtable discussion in the afternoon on their experiences in research and writing reportages over the years, as well as in translating English reportages for French readers.

The Summer School attracted more than thirty-five registered students and faculty members around the world, although the daily online numbers figured to be around twenty. The reduction in number was no doubt attributed to the time differences between France and the various countries from where attendees were connecting.

Because the pandemic blocked any physical presence at the Summer School, the CRONICA team is hoping to hold a two-day workshop in September or October 2021 to cover more of the creative nonfiction writing side of the course program that the online version could not really accommodate. We will have to wait and see if, in the fall in Europe, the pandemic will recede enough to allow the Chilean consortium to travel to Nancy, France.

The Summer School was sponsored by a generous grant from RÉCOLTE (a Comex entity of the ISITE Lorraine Université d’Excellence), as well as by various French research centers, the Humanities Faculty and the École Doctorale HNFB of the Université de Lorraine, and the University of Warsaw’s Centre de civilisation française et d’études francophones en Pologne.

A second Transnational Summer School, entitled “Literarischer Journalismus in der Zwischenkriegszeit: Frankreich, Deutschland und England als Fallbeispiele”, will be held in Nancy at the end of May 2022 (again, just after IALJS 16 in Chile). This École d’été will be sponsored by the Université franco-allemande/Deutsch-Französische Hochschule and will feature as one of its keynote speakers the Belgian literary journalist/educator Alain Lallemand. A third École d‘été on “Contemporary Franco-South African Literary Journalism,” to be held again in Nancy in May 2023 in partnership between the universities of Witts and Lorraine, is currently seeking funding through a joint PHC PROTEA/NRF grant.

​​John S. Bak is Professor at the Université de Lorraine in France and founding president of the IALJS. He holds degrees from the universities of Illinois, Ball State, and the Sorbonne. In addition to articles on literary journalism, he coedited Literary Journalism across the Globe (2011) with Bill Reynolds, “Literary Journalism as a Discipline” (Brazilian Journalism Research, 2018) with Monica Martinez, and will co-edit The Routledge Companion to World Literary Journalism (forthcoming 2022). He heads the research project ReportAGES on literary journalism and war and was recently awarded a three-year research grant to study the influences of the French press on the Chilean crónica.