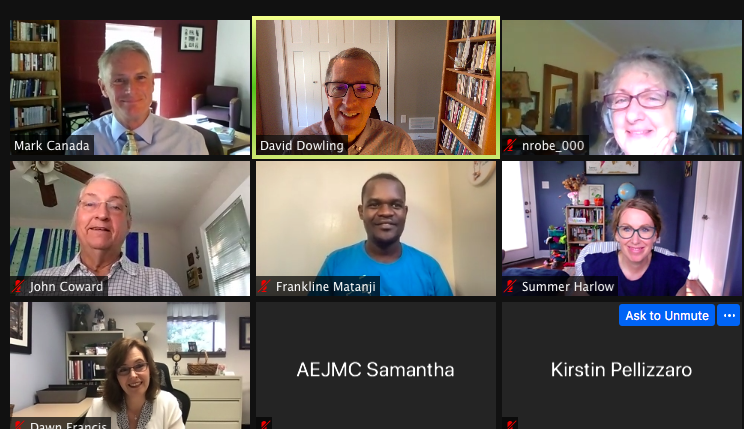 For the second consecutive year, IALJS sessions at the annual AEJMC meeting were held virtually. Originally scheduled for New Orleans, the two online sessions on August 4 and August 6 were dedicated to the theme of “Activist Narrative Journalism: Aesthetics and Politics of Alternative Media.” The 2021 sessions were the first assembled by the new IALJS at AEJMC Program Coordinator David Dowling. Both sessions featured research papers addressing the rise of alternative media and the ways in which independent coverage of politics and protest intersect with new storytelling methods and technologies. Of particular interest was the question of where journalism ends and activism begins and to what extent alternative media outlets function as direct mouthpieces for movement struggles.

The first session of the 2021 meeting began with a fascinating talk by Mark Canada titled “Ben Franklin: Hoaxer or Pioneer?” It considered a period when “journalism as an American phenomenon was younger than Twitter is today.” In the context of this media landscape of “the Wild West before there was a Wild West,” Ben Franklin engaged in an early form of activist journalism, functioning as a watchdog protecting citizens not from the government, but from church authorities and themselves. Nancy L. Roberts then presented “On Where Journalism and Activism Meet: A Historical Perspective,” an enlightening historical study detailing the growth of ethnic and peace advocacy newspapers during the antebellum era. This wave of alternative media was propelled by the conviction that public opinion can be changed by harnessing the printing press. John Coward’s “Writing the Revolution: Red Power Rhetoric in Akwasasne Notes” then delivered a powerful examination of this political newspaper advocating for Native American rights. The newspaper’s communal vision was realized through the work of volunteers and non-professionals, who met resistance from the FBI and the U.S. Postal Service. The final paper of the panel was delivered by Frankline Matanji on the topic of “Social Media: A Voice to the African Voiceless to Challenge Native Western Media Representation.” This provocative presentation began by demonstrating the overwhelmingly negative media bias in the selection and framing of news on Africa. Counternarratives were then explored, particularly those developed through Twitter. These leverage playful humor in satirizing mainstream media representations and present alternative images of Africa in a progressive and positive light.

The second session began with Willa McDonald’s engaging talk, “Literary Journalism for Social Justice: Examining the Activism of Wang Fang and Behrouz Boochani.” Literary journalism’s function as an instrument of social justice was discussed in the cases of Fang’s Wuhan Diary on the city’s lockdown as a response to the Covid-19 pandemic and Boochani’s No Friend But the Mountains on the cruel conditions imposed on refugees imprisoned on Manus Island at the behest of the Australian government. Lisa Phillips then delivered important findings on pedagogy in her presentation titled “Engaging Activist Energy in the Literary/Longform Journalism Classroom.” The paper insightfully framed students’ successful completion and publication of reporting projects as an act of change-making in itself, particularly through the use of methods conducive to literary journalism. The next presenter was Alba Sabaté Gauxachs, who discussed “Literary Journalism as Activism: Opportunities and Challenges.” The talk extended the findings of Professor Guaxachs’s important article in Communication & Society titled “Is the New Digital Journalism a Type of Activism?”

The next IALJS at AEJMC will take place in person in Detroit, Michigan in August 2022.

David O. Dowling, Ph.D., Professor in the School of Journalism and Mass Communication at the University of Iowa, is the author of nine books, including Immersive Longform Storytelling: Media, Technology, and Audience (Routledge). His articles on journalism, narrative, emerging media, and digital culture have appeared in such journals as Literary Journalism Studies, Digital Journalism, Convergence, American Journalism, and Journalism & Communication Monographs.

“In Dialogue with a Living, Breathing Tradition”: a Foreword to The Routledge Companion to American Literary Journalism