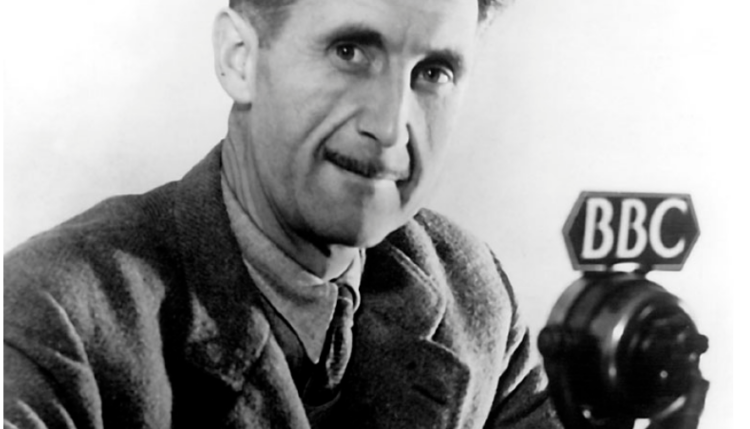 New Insights on Orwell as a Literary Journalist

George Orwell is one of the most researched authors on the planet. But immerse yourself in the man’s life and writings and new insights emerge.

Since becoming a sub-editor on my local newspaper in Nottingham in 1970, and being inspired by George Orwell, the wonderfully creative and radical, committed journalist, I had always wanted to meet his son, Richard Blair. While Professor of Journalism at the University of Lincoln in 2012, a colleague told me about the formation of The Orwell Society with Richard Blair its patron. Here was my chance. I contacted the group, was invited to attend committee meetings and, very quickly, was elected chair in 2013 (a post I held until 2020). Since then, along with a wide range of other interests—such as media ethics, the press coverage of US/UK imperialism, peace journalism, journalists’ ties to the secret state, profile writing, sex and journalism, humorous journalism and global literary journalism—Orwell’s life and writings have been major research topics for me. 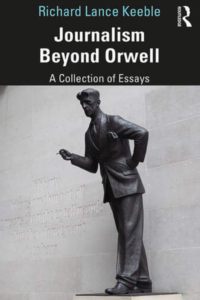 Three of my recent publications have explored different aspects of Orwell as a literary journalist. The opening section of Journalism Beyond Orwell covers Orwell as an activist journalist, exploring his views on the press and two examples of his journalism: the 80 “As I Please” columns he contributed to the leftist journal, Tribune, between 1943 and 1947 and his frontline reporting of the final days of the Second World War for the Observer and the Manchester Evening News.

Until Paul Anderson’s edited collection of Orwell’s Tribune writings there was no academic study of the 80 columns. And Anderson concentrates on Orwell’s politics rather than his journalistic strategies and writing styles. Paradoxically, Orwell shared many of the academy’s prejudices against journalism. Throughout his career he constantly downgraded his own writing as “mere journalism” or “pamphleteering” and looked up to literature which he thought of as a higher form.

Orwell uses essentially two strategies to promote his notion of “the community of the left”: firstly through columns focusing on political, cultural, social or literary issues and, secondly and most imaginatively, through developing a close relationship with his readers. The relationship is crucial to the flowering of Orwell’s journalistic imagination. While he realizes mainstream journalism is basically propaganda for wealthy proprietors, at Tribune he is engaging in the crucial political debate with people who matter to him In the relationship he instinctively develops with his readers, Orwell can, in many ways, be seen as a proto-blogger, responding to letters sent to him directly or sent to Tribune, inviting letters, asking readers to answer queries or point him towards a book, pamphlet or quotation he’s looking for, running a competition for a short story or giving them a quirky brain-teaser to answer.

In many studies of Orwell’s work, the frontline dispatches he composed in 1945 have been either ignored or dismissed as untypically drab. In my detailed analysis, I argue that, in fact, Orwell displays many of the best elements of the journalistic style: immediacy, clarity, a sense of urgency, the ability to highlight the most interesting, the paradoxical, the most tragic; a facility both to generalize effectively and to focus on the specific, relevant detail; an economy of language even within colorful, descriptive, eye-witness reportage; a political and moral stance; and an openness to conflicting views. Yet I also detect a distinct uncertainty as he aims both to admit subjectivity and yet to acquire objectivity.

The paradox seems to present him with an impasse which he attempts to bypass through assuming various quasi-objective personas: that of the newcomer, the eye-witness and the “overhearer” of conversations. Or he emerges as the confident essayist, or secure in the first person. At other times he confronts the problems of the genre more directly by reporting on reporting, by analysing newspaper coverage and dealing with issues relating to language and propaganda.

Other chapters in Journalism Beyond Orwell include examinations of the literary journalism of Lynn Barber, Lara Pawson and my late friend and University of Lincoln colleague John Tulloch. 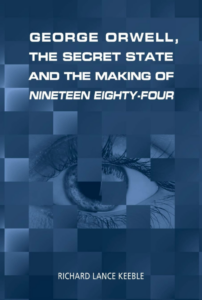 George Orwell, the Secret State and the Making of Nineteen Eighty-Four features six chapters looking at “Orwell and the journalistic imagination.” Orwell is too often associated with the dull, hyper-puritanical world of his celebrated dystopian novel and misrepresented as lacking in humor. I actually argue that Orwell is one of Britain’s greatest humorists. In my study of his humor, I explore the lighter side of his personality, the humor amidst the horror of the Spanish trenches in Homage to Catalonia (1938), the constant high spirits and droll wit of his “As I Please” columns, and essays such as “Some thoughts on the common toad” (1946) and the many satiric elements in Nineteen Eighty-Four (1949).

Much of the debate over his essay “Such, such were the joys” (1952) about his years at St Cyprian’s prep school, concentrates on the extent to which his recollections are truthful or imagined. Little attention has been directed at the literary elements. So here I explore in detail Orwell’s use of dramatic narratives, verbatim dialogue, the balancing of tones and attitudes, the sexually explicit, the polemical, confessional and intimate voices, historical generalizations, the journalistic style and social/cultural analysis. 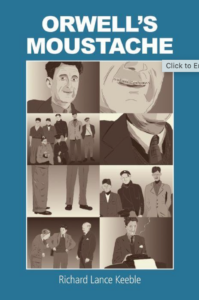 Finally, Orwell’s Moustache provides, over 21 chapters, a range of original insights into Orwell’s preoccupations as an essayist, novelist and activist journalist. Chapters, for instance, look at his treatment of dress (and the politics of attire), his constant preoccupation with advertisements (tied so closely to his understanding of the political economy of the media), his theatre reviewing, and his radical campaigning reportage for social justice in his writings on tramps and down-and-outs.

In conclusion, it’s intriguing to consider that Orwell never went to university. Yet, in effect, his whole life can be viewed as an educational project. He had an enormous curiosity about life—a deep desire to understand himself and the times he was living in. And through his wonderfully original and often witty writings covering so many genres (novels, essays, war reporting, letters, diaries, political analysis, polemic, investigative reportage, columns, radio plays and commentaries, book, film and drama reviews, media analysis, and light sketches) he is seeking to encourage us all to join him on his journey. 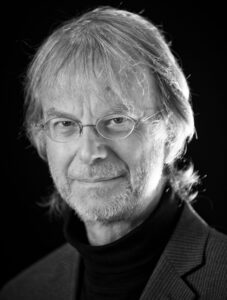 Richard Lance Keeble is Professor of Journalism at the University of Lincoln and Honorary Professor at Liverpool Hope University. He has written and edited 45 books on media-related issues; in 2011 he gained a National Teaching Fellowship, the highest award for teachers in the UK, and in 2014 was given a Lifetime Achievement Award by the Association for Journalism Education.