*Editor’s note: This article is from our archives. It originally appeared in Literary Journalism vol. 14, no. 2 (2020).

In Latin America, the crónica is an historical matter. Everything starts with the Crónicas de Indias, a group of texts written by conquerors, soldiers and evangelizers—such as Christopher Columbus and Hernán Cortés—that describe their arrival in America and constitute a first period of syncretism. Those recently inaugurated and bordering cultural zones continue in the New Spanish Baroque. In this society, which functioned as a kaleidoscope due to its complexity and its mixture of festivals, traditions and worldviews, the figure of the Creole—people born and raised in New Spain, with Spanish ancestry—stands out as an example of a new way of inhabiting a territory. Here, the crónica emerged from the center of the political system and represented, for the Creoles, a search for independence and a representation of their political aspirations.

Carlos de Sigüenza y Góngora is one of the clearest examples of the Creole intellectuality and its ambiguity. [1] In “Alboroto y motín de los indios de México“, a crónica written as if it was a letter, it is possible to observe both the duality of their class and that of society in general, as well as “typical” moments in the life of the Creoles. [2]

Sent to Madrid on August 30, 1692, this crónica narrates in depth a tumult caused by the sale of corn in Mexico City, after a year of lost crops and general discontent at the decisions of Viceroy Conde de Galve. To discuss it, it is important to remember that it is no longer a conqueror who writes about a land at the moment in which he is discovering it. Sigüenza is not a conqueror and he is not only a cronista, he is a Creole, an intellectual, and as such, his intentions go further than to relate a historical event. 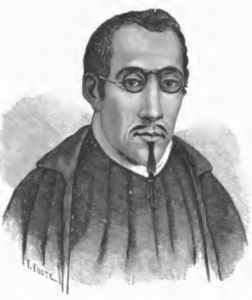 Throughout the chronicle, Sigüenza y Góngora recounts, first, a series of events that are favorable for the viceroy, with the intention of influencing the public opinion of the court. [3] Through the building of churches, granting missionaries to ecclesiastical companies, vacating bays and driving away pirates, Sigüenza y Góngora formed the viceroy as a “sacred prince,” with great political qualities and religious fervor. In contrast, he blames the indigenous people and even rejects his own scientific personality by insinuating that they had also received divine punishments. The favorable images did not justify only the viceroy but the entire system that controlled New Spain’s society. Presenting the image of a nation in progress at the beginning of the crónica, automatically caused the portrayal of barbarism of the natives to increase during the development of the story.

The crónica is not only partial but subjective, as it is written from an essentially Creole vision. [4] The key word in colonial times was “order.” This tumult between indigenous people and the citizens of New Spain not only worked against that order of New Spain. It also had consequences for the class privileges of the Creoles and the project of a Creole nation that had begun to emerge in the middle of the previous century.

Sigüenza y Góngora wrote from the heart of the lettered city—a socio-political system used by intellectuals to construct discourses that validated imperial power in exchange for economic benefits, such as the possibility of studying—that emerged in the New Spain but still is present in Latin America. Ángel Rama explains that within the city there was always another one that “governed and led it”, an administrative headquarters that it was “not less walled but more aggressive”: the lettered city. This “protective ring of power and executor of its orders” consisted of a “doubly closed circuit, since it was born from the viceregal power and returned to it.” The role of Sigüenza y Góngora as an intellectual is thus maintained within the lettered city, in which “intellectuals not only serve a power, they are also owners of a power.” [4] In other words, they not only follow orders, but are fully aware of the operation of the system and the scope of the messages they send.

“It is from the very heart of the lettered city that the intellect of the Creole from New Spain subversively emerges, emerging as a subject of modernity who had found in modern thought an instrument in which he channels and legitimizes his nation project.” [6]

The crónica aims not only to protect the viceroy, but to remove any political intention from the tumult, to present it as a product of the nature of the “drunken Indians” and “ungrateful people”. Sigüenza y Góngora portrayed the indigenous past as something almost mythological, but did not see the indigenous people of his present in the same way. He portrays them as a formless mass, full of addictions, with which they “offered souls to the devil”, especially in two geographical spaces that represented indigenous decadence: the pulquería and the Baratillo market. The history of their ancestors already belonged symbolically to the Creoles: now, the indigenous people were beings who only shouted to scandalize society.

Sigüenza y Góngora represents a new perspective and the emergence of rational thought in the viceregal era as much as he also represents a Creole who defends, with his intellectual weapons and his position, from the lettered city, the system that protects him.

[2] The order/chaos contrasts are a constant in the crónica, and the “people” always appears as the generator of conflicts, not only because their ungrateful nature dictates it that way, but because for Sigüenza all kind of addictions, especially pulque, help them foster greater disorder.

Sac-Nicté Guevara Calderón holds an M.A. in Hispanic American Literature from the Universidad Complutense de Madrid and M.A. in Communication from the Universidad Iberoamericana Ciudad de México. She was a fellow of the Press and Democracy Program (PRENDE) of the Universidad Iberoamericana and part of the 2016 “Balas y Baladas” Journalism MashUp, finalist of the 2017 International Chronicle Prize “Nuevas Plumas” and, since 2019, she is part of the #RedLATAM of Young Journalists. In 2020, she founded the magazine La Desvelada. As an academic, she has presented her work at the Cervantes Observatory at Harvard University, and at various national and international conferences. Her areas of expertise in this field are the Viceroyalty Chronicle of the Viceroyalty of New Spain and the Latin American Chronicle of the 19th century. Currently, she is a PhD student in Modern Literature at the Universidad Iberoamericana Ciudad de México.